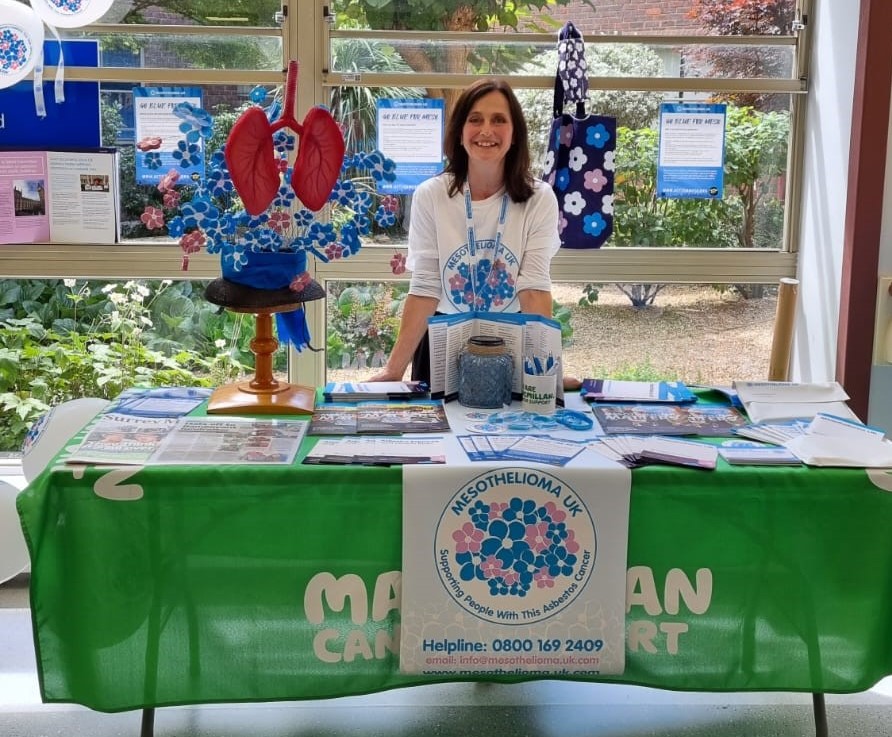 Denise talks about volunteering for Mesothelioma UK and how her tenacity and creative thinking helped raise awareness for Action Mesothelioma Day. Oh, and not forgetting the commissioning of a rather striking hat to boot!

Denise’s story
“My lovely Dad died 11 months after he was diagnosed with mesothelioma. After he passed away, I wanted to do something positive. When I saw that Mesothelioma UK were looking for volunteers, I knew I wanted to get involved. There were several opportunities available, but I chose to be an Events Volunteer & Community Ambassador. This role meant raising awareness of the work that the charity does supporting people affected by mesothelioma – something I was keen to do.

“It was so nice to speak to like-mined people who also wanted to get involved and make something happen.”

“The national campaign ‘Go Blue for Meso’ to mark Action Mesothelioma Day in July was coming up. This gave me something to focus on. I distributed Go Blue for Meso posters and flyers locally, in supermarkets, GP surgeries, community centres, libraries, dry cleaners, restaurants and shops. My next step was to approach some of my fellow volunteers on our WhatsApp group to see if they would be interested in teaming up. Two people responded, Dee and Richard. It was so nice to speak to like-mined people who also wanted to get involved and make something happen. We contacted many organisations, including five London landmarks, but although supportive in principle, unfortunately most were not willing or able to light up in blue.

“Jule is an open water swimmer currently two thirds through her ‘One Hundred Hats Challenge’, where she is challenging herself to complete 100 open water swims wearing a different hat each time!”

“But then I had an idea. I asked my friend Jule Harries about collaborating and supporting the campaign. Jule is an open water swimmer currently two thirds through her ‘One Hundred Hats Challenge’, where she is challenging herself to complete 100 open water swims wearing a different hat each time! Jule tries to co-ordinate her swims within a few days of a celebration, awareness or special day and likes to create a hat for the occasion. I asked Jule if she would help raise awareness for Action Mesothelioma Day. She was very happy to accept the challenge and so this is how the Mesothelioma hat came to be! [see photo of Denise at a stand with the hat created by Jule]

Over the following weeks momentum grew…

26 June – East Surrey’s Hospital’s radio station, Radio Redhill broadcast a pre-recorded interview with me (nerve wracking!) talking about Action Mesothelioma Day and what the Macmillan centre and hospital were planning to do alongside my involvement.

28 June – Jule Harries finished her 62nd swim wearing the specially designed mesothelioma hat. The Surrey Mirror photographer attended and two days later printed an article about the event and my efforts locally to raise awareness on behalf of the charity.

“Many people who stopped and chatted had not heard of Mesothelioma and were interested to ask questions and take away information.”

1 July – the Macmillan Centre at East Surrey Hospital hosted an information table about Mesothelioma in the East Entrance of the hospital.

“We were welcomed and supported by chief staff including the Medical Director, Lead for Respiratory Medicine, Clinical Lung nurses and the Communications team. Fellow volunteer Nile Ateem drove from Reading especially to take some shots for the charity and social media. I felt the day was hugely productive.  Many people who stopped and chatted had not heard of Mesothelioma and were interested to ask questions and take away information.

“It was a busy few months that culminated in a crazy week of events. There were highs and lows with rejections and positive responses. But overall, I found it very rewarding, albeit at times a little overwhelming. However, support from head office was always there which was a great help.

“I’d encourage anyone who is thinking about getting involved with the charity to do so. Much more could be achieved if there were more volunteers working together.  I feel I just scratched the surface on a small area in Surrey. I would love to work with others to help do more; to raise greater awareness and understanding of Mesothelioma and the ongoing risks of asbestos in the UK.”