Support for RAF veteran with mesothelioma 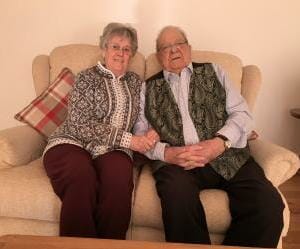 As part of our specialist military information, advice and support service, Mesothelioma UK benefits advisors have recently helped a former RAF veteran with a successful claim for benefits, following his mesothelioma diagnosis.

Squadron Leader William Evans D.F.C. has suffered with breathing difficulties for a number of years and has attributed his condition to COPD (Chronic Obstructive Pulmonary Disease), in addition to other ailments of diabetes, four hip and knee replacements, glaucoma and loss of hearing. A routine check up for his COPD led to his referral to specialists at Glenfield Hospital and his diagnosis of mesothelioma in August 2017.

Squadron Leader Evans enlisted in the RAF at the age 20 in 1941 and had a distinguished career of 23 years. He was selected for pilot training and was quickly transported in cargo vessels to Canada for training. On return to the UK, he gained considerable experience flying the Blackburn Botha aircraft in a gunnery training role followed by operational flying in Mosquito (bomber) aircraft in the then Pathfinder Group.

Following cessation of WWII hostilities, he was engaged in flying a variety of aircraft which included the first jet, the Gloster Meteor. On completion of his contract, Squadron Leader Evans retired from the RAF in 1964 at the age of 44.

He pursued a career as a Probation Officer as his experience to date included working with young people concerning, at times, their welfare, discipline and situations. Whilst waiting for formal probation training, he, for some months, secured employment as an Engineering Inspector working closely with machine operators drilling and grinding metal components for air compression equipment.

Retiring from the Probation Service as a Senior Probation Officer in September 1986 and aged 65 years, Bill continued in employment as a stores controller (electronics) and finally as a property (new homes) sales person until the age of 70.

Prior to his contact with Glenfield Hospital, Bill had no knowledge whatsoever of such a disease as mesothelioma, its symptoms, causes or health effects. Referral of his case by consultants to Mesothelioma UK resulted in contact from advisors who subsequently interviewed Bill and his wife Elizabeth, in depth, at their home concerning his working life and probable exposure to asbestos.

Based on the information obtained, Caroline Barry from Mesothelioma UK and Jackie McGrath from Veterans UK were able to investigate a claim on a dual exposure basis. The DWP and the MOD confirmed the validity and success of their claims.

Bill would advise any person who knows or suspects that they may have been at risk of contracting this disease to contact Lisa Booth at HASAG, the dedicated benefits advisor for Mesothelioma UK’s new Armed Forces service, on 02380 010016 to seek advice and referral to appropriate services.

Now aged 96, Bill concludes: “A big thank you to Caroline and Jackie for their very friendly and professional efforts. Also to Harriet (Macmillan) for her charming and ongoing support and to all others involved in processing my case. Finally, a thank you to Elizabeth for putting up with me.

“I accept that there is no cure for me at my age as I am too far gone to stand any treatment.

I consider myself very lucky to be enjoying a happy and lengthy retirement.”