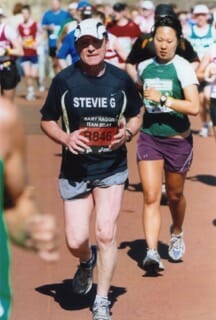 Steve Gardner – a lover of life who never gave up

By his daughter, Paula Bacon

Today is the London Marathon, 23 April 2017, a day full of memories for all who knew my wonderful Dad, “Steve Gardner” fondly known as “Stevie G and 118”.

Throughout my Dad’s life he was an extremely fit and active person running a total of 9 marathons in various countries including London, Chicago, Dublin, Sweden to name just a few, in addition to this he ran many a 10K race, a total of 22 medals. Along with running he also enjoyed various outdoor activities including windsurfing, rowing, cycling, golf, fishing and not to forget his lifelong love of skiing. A real lover of life!

In December 2014 my Dad had what he thought was just a yearly winter cold but the cough wouldn’t go away. He had a skiing holiday planned which he was determined to enjoy and whilst away the symptoms became worse. On his return he decided to visit his GP who immediately sent him for a chest x-ray, he was then referred to our local hospital as the results showed a large amount of fluid on his lung, after several hospital appointments it was decided he should be referred to a lung specialist at Guys and St Thomas Hospital, who felt a VATS procedure should be carried out. My Dad waited an agonising five weeks for the results, during this time we tried not to fear the worse, being positive was so important to my Dad.

In 1967 my Dad was an Apprentice Heating and Ventilating Engineer, he worked on various sites and projects over many years. During this time he was in contact with asbestos on a regular basis and was not aware or advised of its dangers, until one day a job was shut down by men in fully clothed and masked body suits and never told why. Throughout the rest of his working life my Dad was very health and safety conscious, always wearing protective clothing and masks, never knowing that the damage had already been done.

On May 11th 2015 we were given the devastating news that my Dad had mesothelioma. I still remember this day so vividly – your whole world comes crashing down; a man who was so fit and healthy had been struck by this deadly disease. I can’t begin to imagine how he must have felt, knowing there was no cure must have been so frightening. After just a few days he was thinking about what he could try and when was it going to start, he always believed that there could one day be a cure.

It was decided that 6 cycles of chemotherapy over 18 weeks was the best option, so in June 2015 he started the first round of Cisplatin and Pemetrexed. After 3 cycles of chemo a CT scan showed a large shrinkage of the disease. Tthis was fantastic news as during this time my Dad was experiencing many different side effects from the chemo. We were all so happy, the chemo was having a positive impact not only stopping the disease from growing but also shrinking it. The medical team were clearly very happy as this appeared to be a positive step forward for other mesothelioma patients. This form of treatment was extremely tough to tolerate but was having success.

After the 4th cycle of chemo my Dad became very breathless and was rushed into A&E with a pulmonary embolism, where he spent a week in hospital, he would now be on blood thinning injections every day for the rest of his life. This didn’t deter him, he still continued with cycle 5 and 6 of chemotherapy and they decided to change one of the drugs from Pemetrexed to Carboplatin as they felt this maybe easier to tolerate. Further scans showed no more shrinkage but no growth which was fantastic news. The medical team decided to carry out regular CT scans; he was under surveillance, being monitored but no more treatment for a while.

During this time my Dad was continually looking at other treatments, he researched many drug trials in America and in particular one in Germany, he was always thinking ahead and willing to try anything. He would always ask about new drug trials and his eligibility to join them, unfortunately one he was going to start was stopped the day he was due to start. But he never gave up.

My Dad was no longer able to work, the chemo had taken its toll, leaving him tired and in discomfort. He never made a fuss, never complained, just got on with it, so pleased the chemo had stopped this dreadful disease from growing. He was able to enjoy several overseas holidays and planned a fantastic trip of a lifetime to America. We had almost 8 months of no treatment, the CT scans were showing no signs of growth, but during this time my Dad was experiencing a permanent cough, weight loss and pain. Dad continued to look at drug trials but at this point in his treatment there was very little second line treatment. While the disease was stable it was decided no further treatment would be given.

After several months of feeling very unwell it was decided a course of radiotherapy would be good for the pain, so in August 2016 Dad bravely started radiotherapy. Unfortunately this did not work for my Dad, leaving him feeling very lethargic, feeling very sick and with more pain.

During a support group meeting my Dad met Mavis Nye, a very inspiring and positive lady, the “Meso Warrior”. She spoke to Dad at length sharing her experiences and talked about immunotherapy – a treatment which was only available privately. Mavis had a very successful outcome from this treatment through a drug trial with Dr Peter Szlosarek. This inspired my Dad to research this treatment and gave him hope that there may be an alternative treatment. My dad met Dr Peter Szlosarek and after several appointments and reviews he felt my Dad would be eligible for immunotherapy. Unfortunately this had to be funded privately as this form of treatment had not been licensed for mesothelioma patients.

Immunotherapy had been very successful in lung and breast cancer with very positive results. After much deliberating my Dad sought legal advice and decided to pursue the insurance companies for funding for the immunotherapy drug.

In November 2016 we were given the devastating news again, the CT scan showed the disease was growing and had now spread to other parts of my Dad’s body. Time was now crucial for this next stage of my Dad’s treatment, the legal team were pursuing the insurance company but this was taking time, time my Dad didn’t have. So at the end of November 2016 he started another round of chemo this time a different drug “Vinorelbine”. This was proving very difficult for my Dad to tolerate; he was very unwell, losing weight in terrible pain and fading away in front of our eyes. Throughout these very difficult few weeks on chemo he was still speaking to his legal team on a daily basis, a QC was now involved, a court date had now been set for January 2017, he was not giving up. On the 27th December 2016 the medical team decided to stop the Vinorelbine, the CT scan showed the disease was continuing to grow, this was heartbreaking for him. He was now focusing on immunotherapy and the hope that this could be the drug which would extend his life. On the 5th January 2017 he was admitted to hospital to have his stomach drained, unfortunately a procedure he had to wait over a week for.

During this time he became very poorly, but still having daily phone calls with his legal team still fighting for funding. The Palliative Care team were now involved, at this point in his treatment we were all starting to fear the worse, he was now not well enough to attend court, so they were considering a live link up from the hospital to the court room. The day before the hearing, the insurance company finally made an offer, the QC spoke to my Dad in his hospital bed to discuss the offer and it was collectively decided he should accept, this was a euphoric moment, a really positive step not only for my Dad but for other mesothelioma patients. This was such an emotional moment for us all, my Dad had fought so hard to win this case and he had won! On reflection, I believe my Dad was not doing this for himself, he was doing this for others.

The next day my Dad was transferred to our local hospice for symptom control, upon arriving he told the staff he was now going on immunotherapy, he was so pleased. We were so incredibly proud of him, fighting so hard never giving up, always believing there was a chance it could work, believing this was a positive way forward for other mesothelioma patients.

Unfortunately, my wonderful, brave, determined Dad was not able to start immunotherapy as he very sadly lost his biggest battle the following day, January 15th, 2017.

I hope my Dad’s journey through this dreadful disease inspires other mesothelioma patients and their families to stay strong never give up and source other avenues. Don’t be afraid to fight the insurance companies, immunotherapy should be available to all.

A heartfelt thank you to Liz and her team at Mesothelioma UK, for all their support. When Dad was first diagnosed we didn’t know where to turn to, thank goodness I found your charity.

I would like to end on a Quote my Dad wrote when he was diagnosed with Mesothelioma… “I will not give in to cancer, if it’s a fight to the death then there will only be one winner and that’s ME! Tough times don’t last but tough people do!“

Never give up hope!