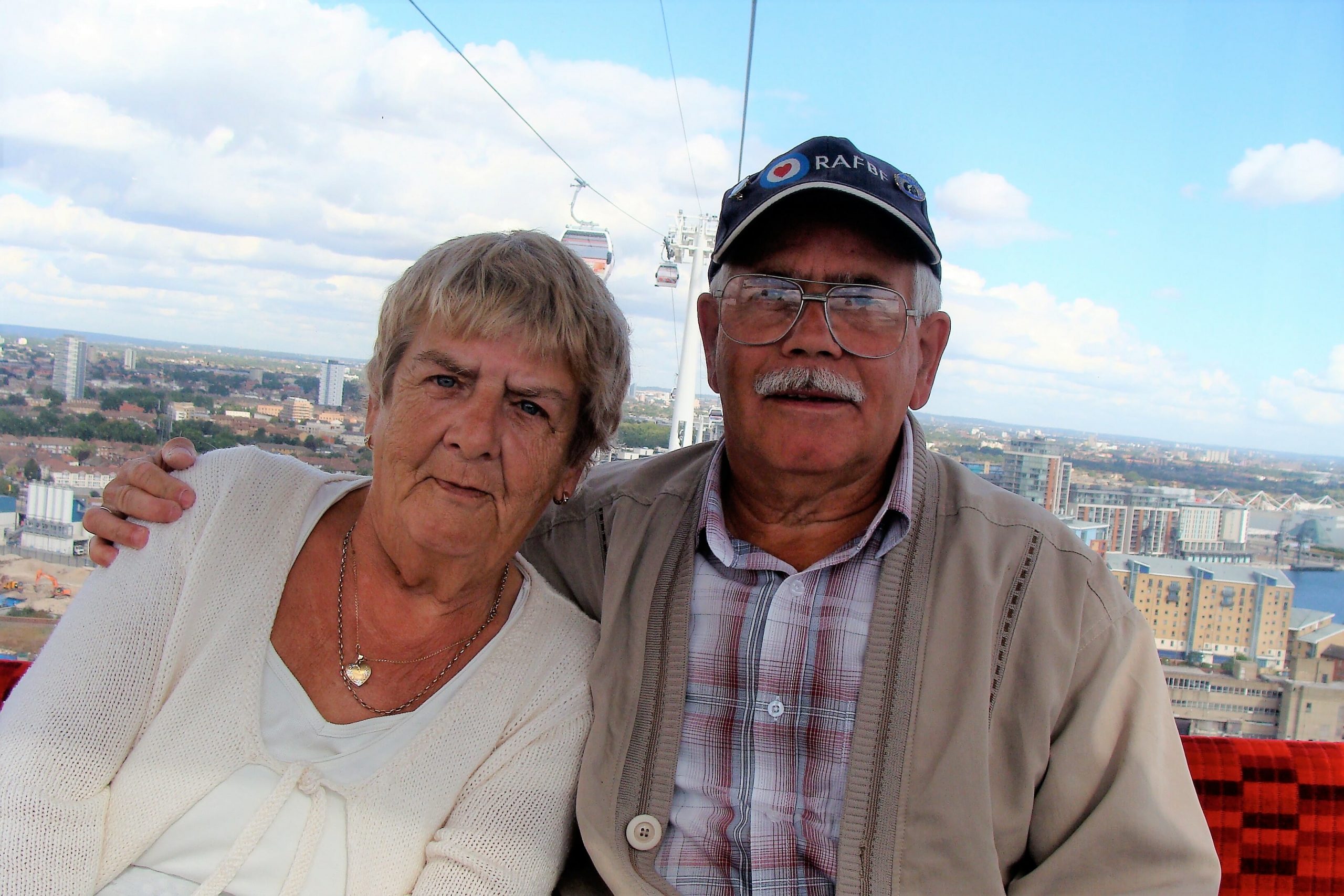 ‘The Lady Who Knits for England’

Rosemary Wallis died of mesothelioma in April 2013, six months after diagnosis, aged 67. It is likely that she was exposed to asbestos during her time serving in the Royal Air Force. Her husband, Brian, is now a Mesothelioma UK ambassador and is determined to help us raise awareness of the disease and the dangers of asbestos.

Rosemary and Brian had been together for 49 years. During those years, they both served in the Royal Air Force (RAF), with MoD and Nato Forces and with HM Government defence contractors, both performing specialist management duties at various times between 1960 and 2010. Rosie served in a variety of administrative roles from 1960 to 1974 with Brian in Air Support Command. In 1974 she left to look after their baby daughter and then re-joined from 1982 to 2010.

Rosemary was seconded to the Falkland Islands Co. in 1982 providing VIP support services in UK and overseas. Over the next twenty years, various hospitality, management, and security duties followed which she enjoyed, especially when meeting the many celebrities and well-known figures of the era. Visits to Canada, United States, Africa and the Far East were regular occurrences. Rosemary finally retired in July, 2010. Brian and Rosemary had moved back to Norfolk, UK in 2002.

From 2010 until just before her death in 2013, Rosemary continued to work tirelessly for RAF charities, a voluntary role she had enjoyed following Brian’s retirement in 1996.  During these years, Rosemary worked as a fundraiser for The Red Arrows Trust; for the RAF Benevolent Fund, and with the Battle of Britain Memorial Flight helping to co-ordinate veterans visits, the provision of social benefits for veterans, and attending Air Shows and ceremonial duties across UK and Europe, as well as continuing in her day job. One of Rosemary’s last ‘operational’ duties included the last Southend Air Show in 2011 where she co-ordinated the Veterans Services Marquee. Rosemary came out of retirement in August 2012 for special service duties at the London Olympics – just two months before she became seriously ill.

One of her most loved roles was as The Lady Who Knits for England – a name she became known by within the RAF because of her love of knitting for others. She would knit dolls clothes, baby clothes, scarves, hats, jumpers etc always for charitable causes and most often sent to armed forces personnel and veterans around the world. It was her way of supporting her ‘service family.’

Brian is very proud of her contribution to the armed forces families and it is a comfort that she was a support to, and respected by, so many people.

In the days following Rosemary’s death, Brian received an email from a young woman in the Falklands which said: ” Rosemary knitted my first dolls clothes in 1989, she now knits my baby’s clothes and my husband’s socks. I am so sad – and my dolls, yes I still have them, they are so sad as well.”

After retirement, Rosemary enjoyed spending even more time knitting and crafting items for armed forces personnel and the RAF charities – not ever seeking any publicity or payment, but just to be of service.

Sadly, in October 2012, not long into her retirement, Rosemary began to experience symptoms of breathlessness and nausea.

For the first three months she was diagnosed with Chronic Obstructive Pulmonary Disease (COPD) and by Christmas, after three failed bi-opsies there was still no definitive diagnosis and Rosemary and Brian had no real idea of what was wrong or what the likely outcome would be.

Within two weeks Rosemary needed oxygen 24 hours a day and in January 2013 a biopsy revealed Rosemary had mesothelioma. By February she was having regular drains to remove the fluid from her lungs and could no longer continue with her beloved knitting.

Despite having travelled around the world to countless destinations, Rosemary’s favourite place was the Thames Barrier Park in Greenwich, London. In March 2013, she asked Brian to take her there, despite her lack of energy. Brian thinks that Rosemary knew this would be her last visit anywhere.

In April 2013, Rosemary was admitted to the emergency department of Southend University Hospital where she died. The coroner concluded that, in all probability, Rosemary was exposed to asbestos through her work for the RAF – either at her workplace or at the properties on the bases where they lived. This meant exposure could have occurred at, in excess of, 100 locations, in the UK and abroad, between 1965 and 2012.

Brian knew that her death was entirely preventable and is determined to find some positivity from it. He does this by raising awareness of asbestos-related cancers and fighting for justice for those exposed at the workplace.

His role as an ambassador for Mesothelioma UK sees him working for improved knowledge, more funding and research, specialist nurses and clinical trials. He is spreading the word and making people listen as a legacy for Rosemary.

Brian said: “We must not lose the ability to continue the shout, nay, continue the roar, that must continually go up – that enough is enough. Nearly, one hundred years of hurt for patients, carers and families, of frustration for clinical professionals and of authority sticking its head in the sand, must come to an end, and it must end soon.

“Let’s do something about it. The legacy of Rosie, the Lady Who Knits for England, requires nothing less. Rosie, and those of us who knew her and follow in her legacy – we will win. In the end.”

2018 marks 100 years of the RAF and Brian is proud of his family’s commitment to the RAF – from his grandfather’s service in the Royal Flying Corps in 1915, and his and Rosemary’s fathers and mothers service in WW II to their own service in the Cold War and the Falklands and his continuing work with RAF charities. Brian is a true “Brylcream Boy.”

He is a Mesothelioma UK Ambassador and advises the military services mesothelioma committee – on armed forces families issues. Brian, 75, was awarded the John Doyle Award for services to Disabled People in 1999. He calls this and his ongoing work with Mesothelioma UK “My Rosemary’s legacy – A Life well Lived.”