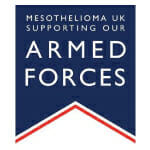 In 2018 Brian Wallis, Mesothelioma UK Ambassador, was approached by friends of Private George Wing who advised him that George had never received the award of the Chevalier National de Legion d’Honneur from the French Government which the French President had declared in 2014 would be awarded to all British & Commonwealth soldiers who had fought in the Battle of Normandy and in the Liberation of Paris and whose bravery and service had not been previously recognised. Due to an administrative glitch, George had not received his medal in 2014. The Chevalier National de Legion d’Honneur is the highest award that a grateful French nation can give.

Brian, and his colleague Richard Palusinski of the Spirit of Normandy Association supported by Gen the Lord Dannatt, former head of the British Army, approached the French Government in 2018 with a request that George should receive his award forthwith as he was approaching his 100th birthday. George was born in Grantham in October 1920 will celebrate his 100th birthday, later this year.

Mesothelioma UK are pleased to announce that Private George Wing, Chevalier National de Legion d’Honneur received his medal in December 2019 and the event was celebrated at the Anglia Motel Annual Awards Ceremony in February. George was joined by his fellow Chevalier members at the ceremony – an exclusive group of courageous soldiers and airmen. Like so many of his colleagues, George fought in many theatres of the Second World War from North Africa to Berlin. The French nation has recognised his service in Normandy and later in the Liberation of Paris.

Brian Wallis said “It has been a great honour and privilege for my colleagues and I in London and in Paris to arrange George Wing’s award, which he truly deserves. George represents the bulldog spirit of his generation and with his fellow soldiers remains an example to us all. The Spirit of Normandy generation must never be forgotten. We thank President Macron and Gen. the Lord Dannatt together with the French people, for remembering the service and dedication of all Allied soldiers, sailors and airmen in Operation Overlord and Operation Dragoon and we especially wish George a very happy 100th birthday.”