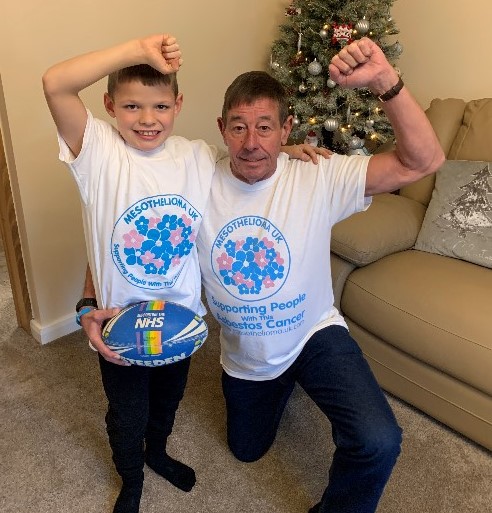 The 20 for 20 campaign returned in its second successful outing in September last year. Led by the team at Sarcoma UK, Mesothelioma UK joined 19 other charities which represent rare and less common cancers, to come together as a group to raise awareness and conduct a major fundraiser through this innovative campaign.

All the charities asked their supporters to sign up to the 20 for 20 challenge and take on 20 challenges over 20 consecutive days.

One of the individuals who decided to take up the challenge, was Reuben Gaunts, an 8-year-old whose grandfather Ray, was diagnosed with mesothelioma in June 2021. Upon learning about Ray’s diagnosis, Reuben, along with his brother Jake and cousins Zak and Lukas, set up Team Grandad to look out for each other and practice positive thinking to help Ray get through his check-ups and treatments.

Eager to raise funds for Mesothelioma UK because of the help it had extended to  Ray, Reuben and his family decided to complete various activities for a year as part of the challenge. Reuben opted to make 20 rugby passes a day for 20 days, given his enjoyment of the game, but more importantly, it was a way to pay homage to Ray who had played rugby during his time in the Navy when he was awarded a cap. Reuben achieved his target of the 20 days and also roped in a group of friends, family members and players from the Oulton Raiders and Sandal rugby teams. Upon completing their various challenges, Reuben and his supporters raised £760.00 for the charity.

At Mesothelioma UK, our nurses led the charge with 20 nurses who completed 20 challenges with everything from meditation, open water swims and even cooking up a 20-ingredient dish! This amazing challenge raised over £2,232 for Mesothelioma UK and we hope to team up later this year for another 20 for 20 challenge.

To date, the 20 for 20 campaign has raised £28,146 with 83 supporters and up to 1,254 donations. Details about the last campaign can be found here. The information about this year’s campaign will be announced closer to the date.