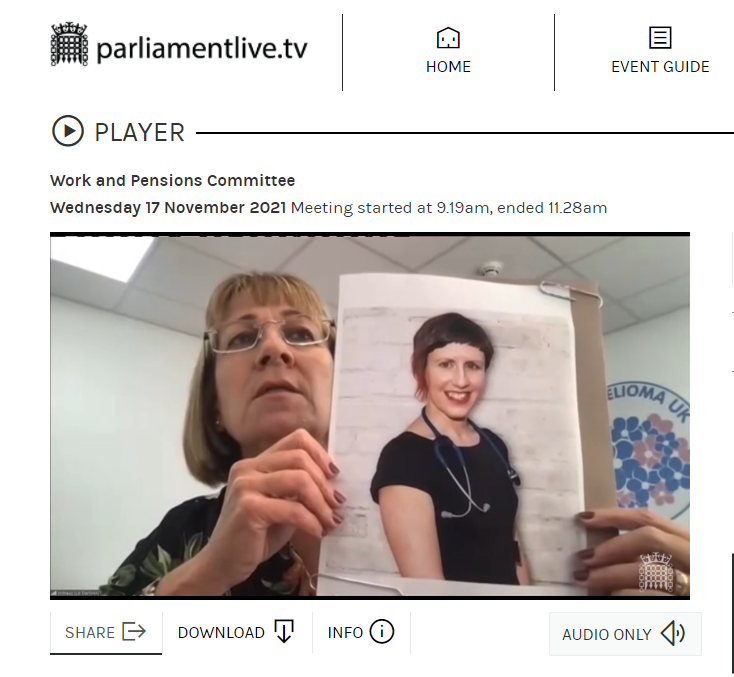 On 17 November 2021 the Work and Pensions’ Committee began taking evidence for its investigation into whether the Health and Safety Executive’s asbestos policy is fit for purpose.

Expert witnesses were invited to give evidence including Mesothelioma UK Chief Executive, Liz Darlison. Joining Liz on the panel were representatives from various organisations including the Airtight on Asbestos Campaign, the Joint Union Asbestos Committee, and the Asbestos Victims Support Groups’ Forum UK.

During her impassioned and powerful testimony, Liz expressed the death toll due to asbestos exposure in terms of the number of people who drowned (1500+) on the ill-fated ocean liner, Titanic: “The total loss of life is equal to the sinking of more than three Titanics every year.”

Liz went on to say: “Some of those aboard the Titanic survived the voyage; sadly this isn’t possible for someone with mesothelioma. Treatments provide hope, but the Government needs to commit to ring fenced mesothelioma research monies and a national plan to remove asbestos to prevent exposure.”

The evidence given to the committee illustrates how asbestos is still the UK’s number one occupational killer and the rising concern about how the demographic and occupation of those dying is changing. Teachers, healthcare workers, members of the armed forces, and younger people who have never had direct contact with asbestos are all at risk of contracting an asbestos-related disease.

Liz gave real life examples of people in their 30s and 40s who worked in healthcare who had been diagnosed with mesothelioma and stated that the situation with mesothelioma in the UK is ‘shameful’ as it is entirely avoidable.

The panel members were in agreement that the UK needs to implement a phased removal of asbestos, which is what countries such as the Netherlands and France are doing, and made this clear recommendation to the committee.

The full evidence session can be watched here.