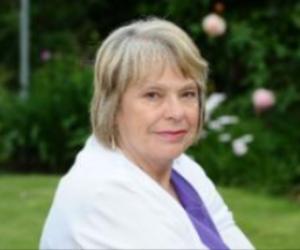 Sadly, Linda passed away in December 2018. She was an ambassador for Mesothelioma UK and strongly believed in sharing experiences and was passionate about raising awareness of mesothelioma. This is her story:

Linda Lakin is 65 years old and lives in Birstall, Leicestershire.

Linda was diagnosed with mesothelioma in 2013. The diagnosis followed four years of testing to find out what was causing her chest pain. As she hadn’t knowingly been exposed to asbestos, the doctors and specialists weren’t looking for mesothelioma and Linda was initially told that she had a chest infection and was given antibiotics.

The pains in her chest continued and she was eventually seen by Mr Apostolas Nakas of University Hospitals of Leicester NHS Trust following a CT scan which revealed a thickening of the pleura (the lining surrounding the lungs). He suggested that, while Linda did not have lung cancer, she may have mesothelioma. Although not knowingly exposed to asbestos, Linda had worked in a dry cleaning shop where asbestos was used on the ironing boards and to lag the pipework on the steam cleaners and this was most likely to be her exposure.

This was three weeks before Mr Nakas conducted a biopsy. Linda used those three weeks to find out more about mesothelioma and try to prepare herself for the diagnosis.

The biopsy confirmed mesothelioma. Linda took a pragmatic approach to the situation, having had a few weeks to think about it, but it was hard to break the news to her children who struggled to come to terms with it.

Despite the diagnosis, Linda was not feeling unwell at that time and was told that she was still in the early stages of the disease, as most people are older when it is discovered.

Linda opted to tackle the disease with surgery to remove the lining from her right lung. While she says that she would probably make the same choice again, she may try chemotherapy first as the operation made her feel quite unwell.

The surgery removed all of the cancer but it returned 18 months later and Linda was referred to Professor Dean Fennell at University Hospitals of Leicester NHS Trust.

The regrowth of the cancer was treated with chemotherapy this time which reduced it but it has since grown again.
As a consequence of this regrowth, Linda has since taken part in the clinical trial for Epizyme which, although made her feel more sick, did not put her off trying. She has since tried a new immunotherapy trial but unfortunately had an adverse reaction to the drug which meant that she had to come off the trial after only three infusions.

However, scans have since shown a reduction in the size of the cancer which mean that the immunotherapy treatment has had a positive effect. Linda is currently being monitored until the positive effects stop before having further treatment. She is currently feeling very well and able to carry on her normal life, something she has not felt well enough to do for most of this year.

Linda’s advice to patients would be to find out as much as they can about treatment options and trials so that they can arm themselves with all of the information and can prepare themselves before making a decision.

Increasing awareness of mesothelioma, and those most likely to be affected by it is important to Linda as early diagnosis means more treatment options. Linda is aware that options depend on where in the country you live and feels lucky to have access to specialist oncologists and surgeons in Leicester.