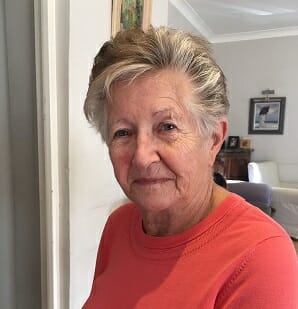 Update: Sadly, Jenny passed away in September 2018. Her story shows her positive attitude and determination to enjoy the time she had left.

Jenny is 79 years old and was diagnosed with mesothelioma in January 2016. After chemotherapy, Jenny is now having x-rays every two months but is currently not having any treatment.

Jenny, from Chichester, was enjoying a holiday in China when she noticed that she was very breathless after walking. Although she thought that maybe something wasn’t right, Jenny put it down to the after effects of a bout of bronchitis, which she had had several times before.

When she returned home, Jenny visited the breast clinic for her annual check-up since having breast cancer in 2009. The doctor there recommended a chest x-ray. Jenny had the x-ray in December 2015 and was told that she had a mass on her lung.

The consultant wanted to perform a biopsy straight away but Jenny was adamant that she was going to go on a planned trip to Norway in January.
Jenny went for the biopsy when she returned from Norway towards the end of January. The consultant told Jenny that the results of the biopsy showed that she had mesothelioma. From there everything happened very quickly and Jenny had a lung drain fitted at the beginning of February and began chemotherapy.

Like most people given the diagnosis, Jenny had never heard of mesothelioma. However, the diagnosis made sense to her when she learned that it was linked to asbestos exposure. She had lived in a house that contained asbestos and spent many years working in hospitals where it was used for lagging pipes.

Jenny asked how long she had left and was told months. The consultant couldn’t say if she would see the end of the year.

Having had many operations in the past and having recovered from breast cancer, Jenny was used to fighting illnesses and winning. It was hard to accept that this cancer was incurable and that chemotherapy was the only treatment option.

Jenny was not keen on the idea of chemotherapy as she wanted to maintain her quality of life. Her initial response was to say no to treatment but the doctors and nurses convinced her to do it – and she’s very glad they did.

Jenny set about ticking things off her bucketlist – things that she wanted to do with her time left. Travelling was high on the list and so she has had family holidays to Portugal and river cruises with friends on the Rhine, the Rhone and the Danube. She also wanted a girls’ weekend with her daughters so they booked a spa hotel and enjoyed a luxury lunch at Michel Roux’s restaurant, The Waterside Inn.
After her chemotherapy finished in May, Jenny planned a large party – her ‘wake’ – and invited all of her friends and family. Everyone knew the reason for the party and it was a wonderful chance to spend happy times with loved ones.

Throughout her life Jenny has worked to help others. She has worked as a nurse, a maternity nurse, a care assistant and run a nursery school. Currently Jenny volunteers for the Air Ambulance and the Rocky Appeal at the Queen Alexandra Hospital that raises funds for life changing equipment.

Even after her death she plans to help others by donating her body to the hospital for medical research, teaching etc.

Twenty months after diagnosis, Jenny is no longer having any treatment but has x-rays every two months and is somewhat reliant on oxygen and a wheelchair. Though the mass is showing a little larger at each x-ray, Jenny has decided that she will not have any further chemotherapy as she is focusing on enjoying the time that she has left.

Jenny said she is not afraid of dying and has come to accept it as something she cannot change. Her advice is to do the things you love now and not wait; have fun while you can and if you don’t have anyone to buy flowers for you, buy them for yourself!

All arrangements for after her death have been made so Jenny has no worries about burdening her family – she even has several bottles of champagne, ready to be given to loved ones so that they can celebrate her life after she’s gone.

Jenny has nothing but praise for the consultants, nurses and all the staff at the Queen Alexandra hospital oncology and respiratory departments. She particularly mentions Dr Lithgow, Dr Ram and Mesothelioma UK Clinical Nurse Specialist, Anne Moylan.

Jenny is now making the most of her time, spending it with her family and friends. She said: “I could not have made it through this without the wonderful support from my daughters, sons-in-laws, niece, grandchildren, great grandchildren and my amazing friends. Their support has been so important to me.”