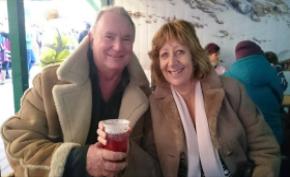 Helen was diagnosed in April 2016 and had surgery followed by chemotherapy. This is her story, as told by her husband, Tony.

I am a 62 year old husband, father and grandfather working towards an enjoyable retirement. At least that was the situation until April 2016 – this was when my wife was diagnosed with mesothelioma and told most people only survive 6 to 18 months. Our world was shattered. On receiving such devastating news what do you do? How do you come to terms with such terrible news? How do you deal with issues like telling your family and friends?

Chances are if you are reading this you are fully aware of these and lots of other issues you have to deal with.
My wife was diagnosed at a relatively early stage and was told chemotherapy would be the best treatment when required and until then, it was going to be a wait and see policy because, at this point in time, the mesothelioma was stable. We could not accept this and started looking to see if there were any other options/treatments. During our research, we came into contact with HASAG (a Hampshire-based asbestos disease support group). We found out that surgery was available but was not performed in this area so we were referred to Glenfield Hospital in Leicester where my wife was offered the surgery.

It was explained to us that surgery was not a cure but would hopefully give us more time. After much discussion, and due to the fact that my wife loves life and her family and wants to be around to see the grandchildren grow up, she opted for surgery. The surgery was carried out in November 2016 and after 10 days in hospital she was discharged.
We met a lady that had the operation 3 years ago and another that had it 9 years ago and this gave us some hope. We are fully aware that surgery offers no guarantees but meeting these ladies my wife thought it was definitely worth the gamble compared to a possible 18-month prognosis.

I know that surgery isn’t offered in some areas and I definitely do not have any medical training that gives me any right whatsoever to suggest that anyone should consider it, I just thought it might be of interest to anyone that has been given the terrible diagnosis that they have mesothelioma.
You are probably wondering how she is doing 7 months on from the surgery.

Well, having just completed 4 sessions of chemo she was told yesterday that chemo has finished and she will see her oncologist in 6 weeks’ time – the longest period between hospital appointments since her diagnosis.

Prior to my wife’s diagnosis of this terrible illness, I (like many others) had never heard of mesothelioma and like all others suffering from it and their families it has had a devastating effect.
From the first time we came into contact with HASAG they have been a great help with support and information on entitlements, and by attending meetings it has made a big difference being able to talk to other people in the same situation.

My family and I are doing a 22 mile Dorset circular walk in July in order to raise some funds for HASAG both as a thank you and also to help them to continue with the fantastic work they do.

I keep referring to her as my wife, the reason being she didn’t want it being general knowledge about her condition especially as it was 6 months before she told any of the family. However, the reason for me writing this article is that she actually wants people to know THERE IS SOME HOPE out there.

Helen wants to be part of the walk so we have started training and incredibly a month ago, just 6 months after the operation she walked 6 miles across country tracks (without taking breaks) in 2 hours 30minutes. I think this is inspirational.

The walk is taking place on 29th July, we obviously want to raise as much money as we can. If you would like to donate you can do so on line by visiting “JUST GIVING” and entering Dorset Coast Circular Walk Helens Hike. No matter how small, every penny counts.

Thank you for reading this.