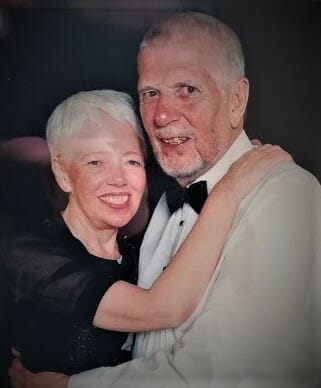 David was diagnosed with mesothelioma in November 2018. Following surgery, he now has scans every three months. David wanted to share his story to remind others of the importance of gathering as much information as possible so that patients can make fully informed decisions about treatment options.

David, 76, worked in the service sector until he retired at 65. David’s passion is golf and had begun to notice he was feeling more breathless when playing a full game but put this down to getting older.

The slight breathlessness, combined with what he described as a bruise on his ribs, were the first signs that anything was wrong. There was no visible sign of a bruise but when the tenderness didn’t go away, David visited his GP in February 2018 but was told all seemed clear on his chest.

When his symptoms didn’t improve, David visited the GP a few more times and on the third occasion, he asked for an x-ray. The appointment was made for July and the conclusion was that David had pneumonia and some fluid on his lung. He was given antibiotics and an appointment for another x-ray six weeks later.

After four weeks, David began to feel unwell and so returned to the GP. David saw a different GP this time who prescribed different antibiotics and brought his x-ray appointment forward.

The second x-ray showed more fluid on the lung and David was booked in for a CT scan in September 2018. The scan showed malignant features and David was referred to a respiratory specialist.

The specialist took a sample of the fluid on his lungs and asked about any potential exposure to asbestos, of which, David and Jane didn’t understand the relevance, at the time. The results came back in October but didn’t show anything conclusive, so a biopsy was arranged.

The biopsy results came back in November 2018 and confirmed mesothelioma. By this time, David and Jane and looked up the relevance of asbestos on the internet so they had heard of mesothelioma. They believe David was exposed to asbestos while he was working as a hotel manager, in an old building.

David was sent to an oncologist and was given a prognosis of 4-7 months. The couple were told that while chemotherapy could be an option, it wouldn’t prolong his life much and it would be best to just enjoy the time he had left while he was feeling relatively well.

David and Jane tried to accept this, but it wasn’t easy, especially as David just didn’t feel unwell enough to die! They became determined to look for alternative options. Simply doing nothing and waiting to die was not an option.

They set about researching mesothelioma, its treatments, trials and specialists. They booked an appointment with a consultant who, after reviewing David’s scans and test results, told them that there were treatment options that they could consider.

One option they were offered was an extended pleurectomy and decortication*. This involved the removal of the lining of the lungs, the pericardium and part of the diaphragm.

Despite the seriousness of the operation, David didn’t hesitate to agree to it. The couple felt like this was the first time anyone had offered them any hope and they were determined to grab it with both hands.

The surgery took place in December 2018 and the surgeon concluded that he had removed all visible signs of the disease. Since then, David has been having scans every three months but is doing very well and is enjoying golf again!

David and Jane feel that it’s important to share their story and encourage others to keep asking questions, push for alternative options and research where to find the best help. Specialists in mesothelioma are not available in every region of the country, and David and Jane urge people to seek second opinions.

David says that people should be able to have all the information about every option so that they can make decisions. He commented that “it can be difficult in that situation to question the professionals but it’s your body and your life, and sometimes you need to be forceful”. Fortunately for them, their persistence has paid off.

David and Jane now attend the support group, MELU, which they say is a ‘real tonic’, and full of positivity and hope. They would like to see an end to the postcode lottery that can occur for rare diseases and feel that everyone should have access to the same great treatment and care no matter where they live.

* Note from Liz Darlison, Consultant Nurse and Head of Services for Mesothelioma UK:
Extended Pleurectomy Decortication is not currently a standard treatment for pleural mesothelioma in the UK but it is the focus of a large trial currently taking place in the UK. The MARS 2 Study is a randomised clinical trial looking at whether chemotherapy alone or chemotherapy and surgery is better for people with mesothelioma. If you would like to learn more about the trial, entry criteria or the randomisation process please speak to your local team or contact Mesothelioma UK.