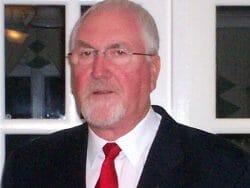 Two years on from diagnosis…and stable.

Colin Morris, 73, was diagnosed with mesothelioma in July 2016. Colin was exposed to asbestos both during his time in the Royal Navy and at an electrical contractors. Following one round of chemotherapy, he is currently having regular scans but is not on any treatment as the cancer is stable.

Following an apprenticeship with an electrical contractor between the ages of 15 and 18, Colin joined the Royal Navy in 1963. After the usual training, Colin spent nine years with the navy, on several ships, as a Radio Electrician and a Petty Officer Radio Electrician before leaving the navy in 1972.

Colin then worked for Philips Telecom for 27 years before early retirement to enjoy bowling, holidays and spending time with his grandchildren.

It was late 2015 when Colin began to think that something wasn’t quite right. He would become breathless walking the dog and frequently needed to spit up phlegm. For around the next five months, Colin’s symptoms would come and go. He eventually went to see his GP in May 2016 who prescribed a course of antibiotics.

Two weeks later there was no improvement and Colin’s GP sent him to A&E where he had blood tests, x-rays and an ECG. He was called back in June for a biopsy from his right lung and had to spend a week in his local hospital in Nuneaton. Doctors performed a lung drain to remove five pints of fluid from his lung and a procedure to reduce the chances of it filling again.

In July 2016 Colin was called back to the hospital for the results and was told he had mesothelioma caused by exposure to asbestos. This was a shock for Colin and his wife and the first question Colin asked was “Do I have weeks, months or years?” The doctor told them months.

After such a shocking diagnosis and prognosis, Colin says that he and his wife would have appreciated a ‘better bedside manner’ or a few words of hope.

When they were introduced to a specialist nurse, things became a little clearer. The nurse was able to give them lots of information about mesothelioma and what the next steps should be. Colin was given contact details for Doug Jewell at the support group, Asbestos Support Central England.

Over the next few days the support group helped Colin to complete paperwork for all the government benefits he was entitled to and the MoD compensation claim for working on ships during a refit. Colin was also given details of solicitors who specialise in asbestos exposure claims.

Colin was referred to a specialist doctor at Nuneaton Hospital and this time, the news was a little more positive. The doctor told him that mesothelioma varies from person to person and was advised to not begin any treatment yet as the cancer was stable, he was feeling reasonably well and still enjoying a good quality of living.

Despite the initial prognosis of months to live, for the next 14 months Colin had no treatment, just regular scans and lung drains.

It wasn’t until September 2017 that a scan showed a change in the cancer and was advised to have three months of chemotherapy. The treatment wasn’t pleasant and put Colin off his favourite tipple of red wine!

However, since then the scans have been showing that the cancer is stable again and Colin continues to enjoy time with his family in Scotland, two years on from his initial diagnosis.

He has now been referred to Glenfield Hospital and is hopeful for the opportunity to join clinical trials such as immunotherapy.

His advice to anyone who experiences symptoms as shortness of breath, phlegm build up, a short temper and generally feeling run down is to see their GP straight away. Colin also urges people to think back to any situation where they may have been exposed to asbestos and to mention this to their GP as early as possible to help with diagnosis.

NB: In cases of dual exposure, legal advice should be taken  before a decision on the lump sum is made, as a civil claim could be worth more and may entitle a widow to a war widows pension.

By Mesothelioma UK Senior Nurse Specialist and Project Lead for Wales, Sarah Morgan We are very excited to report that we now have confirmation from the Welsh Health Specialised Services Committee (WHSSC) for the inclusion of mesothelioma as part of the Specialist and...

Documents saved from destruction as part of legal action taken by the Asbestos Victims Support Groups Forum UK (the Forum), have revealed the company hsj Intermediate Holdings Limited (Cape), knew of the high risk of fatal cancer caused by the use and handling of...

Look out for Patient and Carer Day 2022

Each year, Mesothelioma UK holds its annual patient and carer day - a day of learning, shared experiences and a chance to come together. The event hosts a number of key speakers discussing, surgery, new treatment and trials and many other concerns or questions that...