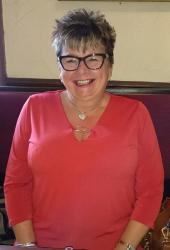 My name is Vivienne, I was diagnosed with mesothelioma in August 2015 aged 59.

In April 2015 I had a really bad chest infection which needed 2 lots of antibiotics and steroids.
I hadn’t ever really suffered with a bad chest and I was also a non-smoker. My GP thought I might have developed asthma and prescribed an inhaler.

We went to Rhodes in May 2015 and I found I was getting breathless going up a slight incline that had never bothered me before. When we came back I went to see my GP and said I thought I needed a chest x-ray as things weren’t right.

I had the x-ray at the local infirmary on my own as I really wasn’t expecting anything to happen. They immediately admitted me saying a third of my lung seemed to have collapsed. This was the start of a very worrying time for me. I’m a widow who lost her husband to cancer 11 years ago and suddenly I had all these memories of a terrible time in my life.

They did a CT scan the next day and sent me home to come back in a couple of days for the results. When I went back they said there was a chance it could be cancer and they made me an appointment at another hospital the next day.

My partner was unable to come so one of my sons came with me. I have to say the doctor was great. They did a scan and said there was fluid on my right lung which they tried to withdraw to relieve the pressure. I wasn’t expecting it to be so uncomfortable and frightening.

They said they would test the fluid and see me a week later. They weren’t able to get an answer and kept telling me all the results were coming back negative so it was good news. I was so relieved and began to believe everything was going to be okay and I would be here to see a new granddaughter born in January 2016.

There was a period then from June 2015 until 5th August with numerous tests, more drainings (which I hated) a bronchoscopy. All results were negative for cancer.

My consultant said he was 99.9% certain I didn’t have cancer. I was so relieved and happily told my three sons everything was going to be okay. I was sent for a vats procedure where they go in with a camera and take biopsies. They took a litre and a half of fluid from my lung, and was advised I had to wait for the results but whatever it was there would be treatment.

Three weeks later I was sat with my partner, Ian, at the wound clinic and I asked if my results were back, (I had rang a few times and was becoming increasingly worried that they didn’t know what was wrong). The nurse finally said they were back and that I had cancer.
I asked where it was and what it was called. She said in my lung and called mesothelioma. I had heard of it as a colleague of my husband had died from it (they were both joiners, and that this is probably how I got it – from washing his overalls many years ago).

My next question was is there a cure? She said those immortal words “incurable” and I remember a sense of cold going right through my body. I didn’t cry and was in a way relieved that I now knew what was wrong with me. Ian and I went home first and then to see my sons to tell them. This was so difficult, I was trying to be optimistic and didn’t want to frighten them.
I told the rest of my family and friends but not my mother. She was 84 and has vascular dementia. It has been really hard trying to cope and stay silent. It was particularly hard when I was having chemo and unable to see her as she would have realised I was unwell.

The day after my diagnosis we again had to go to a different hospital. The room was packed with different people, doctors, lung nurses. I think they thought they had to tell me, I looked at them and said I knew I had terminal cancer and wanted to know “how long I had”. It was a pleasant surprise to be told “best of three years”. I told them I would still be here in five years and had too much living to do and grandchildren to see.

Next was an appointment with the oncologist who said I needed a pleural drain fitted before my chemo. I was really upset by this, a foreign object put in and my partner would be trained to drain me. I have never felt so unattractive as when I had that drain in – only able to shower not take baths, buying clothes that were loose so as not to notice the drain.

I had four sessions of chemo and, like everyone, suffered from side effects – nausea, lack of appetite, feeling just so awful you don’t know what to do with yourself, incredibly tired.
We decided a positive attitude was needed, little treats in between chemo, a few days away… We had already booked to go to Cape Town and I was determined to go. My results after chemo were encouraging, it hadn’t grown. The staff and doctors at Wythenshaw Hospital have been amazing. I have to say a special thank you to my nurse Lorraine Creech, without her this time would be so much more difficult.

We go to the support group meetings, we went to the conference in Birmingham in May. For me, joining these meetings helps me to come to terms and meet people with the same condition.

I remember at my second chemo session meeting a woman who had had mesothelioma for four years and she looked amazing. For the first time I truly felt there was hope. Not of a cure but of quality of life. (And the drain was taken out in April – fantastic to be able to have baths and go swimming again!)
In May this year I was advised that there had been significant thickening in my lung. I was hoping to go on a trial but with our plans to go away for three months I was unable to take part.

I count myself lucky that I’m able to be have this wonderful time with Ian and my sons, lucky that I have Ian and his unwavering love and support, grateful to my sons of for being there for me and making life normal (telling me off for spoiling the grandchildren!). Actually, everyone has been brilliant and supportive.

We have had many wonderful holidays this year (2016), to places I’ve always wanted to visit. At the moment we’re in Cape Town for three months, rented a house, family coming out in December and my middle son is going to married here.

A new chapter will start at the end of January with CT scans, hopefully a trial drug, if not more chemo. The one thing I’m certain of is that I’m extremely optimistic, life is good and I’m surrounded by people who care.

Vivienne very sadly passed away in July 2018. She was a real beacon of support for other mesothelioma patients, families and carers. Our deepest condolences go to her partner, Ian and their family.