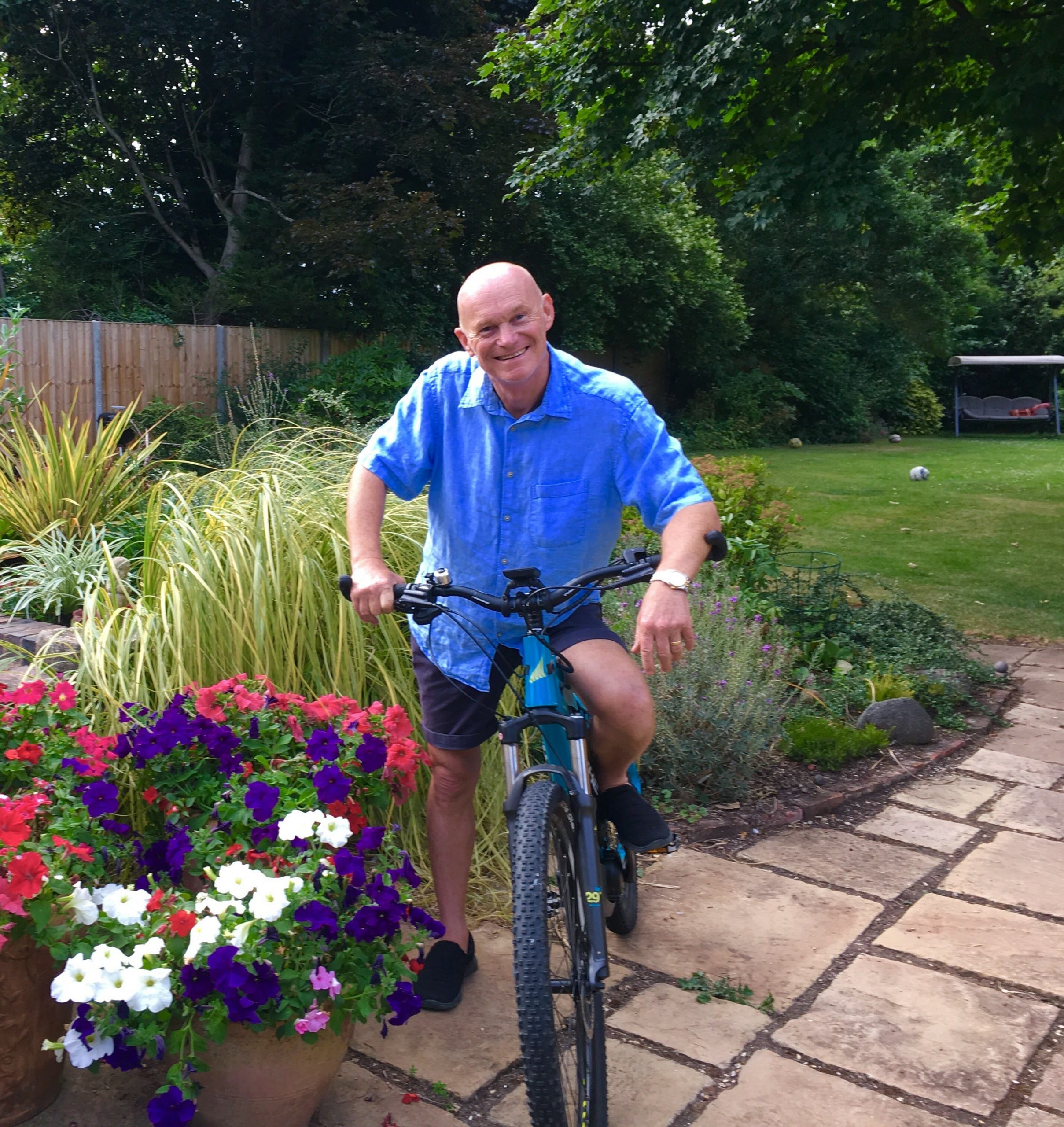 “I’ll teach the children how to live with cancer not how to die from it.” July 2017

I was diagnosed in February 2015 by a lovely, but rather distraught, NHS doctor and his nurse assistant. I was told I had 3 to 10 months to live and that I should get my ducks in order, check my insurance and go back to see the oncologist with a view to getting palliative care.

I asked to get a second opinion and was directed to Sanjay Popat at the Royal Marsden.

Meanwhile, my wife and I made a plan for how we would explain this to my three children. I decided the best approach was total honesty but I needed a week to frame in my thoughts.

I’d taught them to wipe their own bottoms and sometimes remember to wash their hands (!), to ride a bike and hold a knife and fork correctly and to respect people less fortunate than themselves. So I decided I could teach them how to die with dignity.

But that all changed when I saw Sanjay Popat. He explained how the 3 to 10 months prognosis was derived (based on statistics generally from people much older than myself). He said that everybody was different, I was young, fit and strong and that some people respond well to chemotherapy. He also talked about trial drugs and that my cancer appeared to be slow-growing.

He made me cry with hope and changed my view such that I decided to teach the children how to live with cancer not how to die from it.
He sent me away with a plan and the first step was to go on holiday with my wife to Vietnam and Cambodia. On my return I was given 8 x 3 weekly sessions of cisplatin and Pemextered. I don’t need to go into the detail of this regime but it was quite hard.

Nevertheless, I managed to go to Switzerland and dragged my poor family up the Alps (unfortunately I got altitude sickness for the first time in my life, and, a telling off from my wife!), and to Majorca with the kids for a week in between my chemo cycles. The last two cycles I was on Avastin and continued on Avastin for 32 x 3 week cycles.

I smoked marijuana to help with the worst of the sickness short-term, eventually making my own Simpson oil which gave me an amazing night’s sleep, reduced my blood pressure, increased my appetite and help to reduce nausea.

During my period of time on Avastin I visited Barbados with my family, went to Myanmar with my wife, had a family holiday in Goa, a long weekend in Venice with my wife and an extended trip to Singapore, Indonesia, Java and Bali, went to Glastonbury, attended my eldest’s graduation, saw my youngest go to university and my son get an internship in London, and climbed Snowdon with my son. (My wife and I are passionate about travelling the world , often backpacking, and luckily we had terminal illness cover on our mortgages so we are able to afford such extensive travel).

But had to accept I could no longer ride my racing bike due to muscle weakness, so with sadness gave it away. But my local cycle shop persuaded me to try an electric bike. I thought they were just a gimmick but wow! Soon I was cycling around the Isle of Wight on my new electric bike.

The tumour had shrunk but over a year it grew slowly till April 2017. Then I started on carboplatin and Pemextered. I’ve currently had 4 of 6 cycles and I seem to be tolerating carboplatin better.

I’m convinced it’s doing some good and my terrible cough is now normal with hardly any mucus. I am still very weak but recently had a four week break and had a long weekend in Iceland with my children.

I decided I wanted to do the charity bike ride I’ve often thought about. In my mind, it’s not so much about raising the money and, if I’m honest, not just about raising awareness of mesothelioma.

I was so upset when I thought I would never ride my bike again but I really want to get the message across to people living with cancer and those who have survived it you can still live your life but in a slightly different way.
I’m sure there are many cyclists like me who believe they can no longer ride due to neuropathy in the feet and legs, but with a little help from the battery I’m empowered!

I believe only someone with a terminal illness can really value life the way I do every day, living in the moment, mindfulness etc

I know my condition is terminal but we are all born with a terminal illness…Luckily for me I try to follow the Buddhist philosophy which means I don’t have to believe in a God to enjoy a moral, fulfilling life. I have developed an inner peace so that, when my time comes, I will be sad but I hope not scared.

The above is how I’m trying to prepare my kids they are slowly getting the idea!

I’ve already planned my own funeral and there is nothing more I need to do other than enjoy every day I’m gifted.
So part of that, I hope, is to cycle from Morecambe to York on 9 September 2017, to raise money for Mesothelioma UK. My ride is to stop people with terminal cancer from thinking their life is over. Don’t fear Cancer – kick it in the nuts I will ride with my 2 brothers in law, stopping in Giggleswick and Harefield then York. If you can, please donate, I’ve set myself quite a target!

I can’t go without mentioning my wonderful kids. My eldest is 32 she was a mature student and was awarded a First at KCL. She is a nurse I’m so proud of her (her mum – my first wife – died when she was young so she’s been through it)

My son is 21 just finished his internship at a media agency in London finishing his degree 2018 – he’s off to Asia for a few months; I’ll miss him.

My little baby girl who struggled at school suddenly found she can do mathematics and is at university of Leeds reading business and mathematics (she got several firsts in her first year in calculus and subjects I don’t understand!) and her A level results were among the highest in the UK!

And my wife who is simply amazing. A tower of strength and resilience and the loveliest girl I ever met. We’ve been married 25 years and I’m so lucky to have met her.

I’ve so much to live for.

UPDATE: Tim and his brothers-in-law raised over £10,000 on their coast to coast cycle ride. This is Tim’s video of the trip.