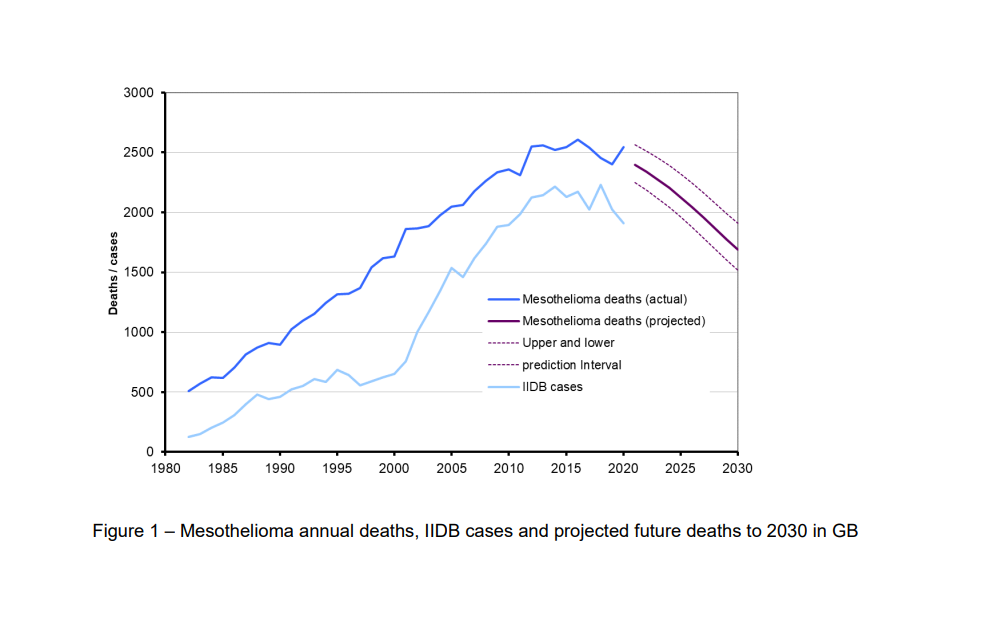 The Health and Safety Executive has been publishing statistics on annual mesothelioma deaths in Great Britain on a consistent basis for 50 years. Detailed statistical tables and commentary are available as part of HSE’s National Statistics web pages here.

The data provide a stark picture of the tragic consequences of the industrial use of asbestos which was widespread in the post war building industry as well as many other industrial settings where asbestos was widely used. By the time the most hazardous forms of asbestos had been banned in 1980, many construction workers in particular had accrued high exposures which then led to the steep increase in mortality rates over the following decades. Britain now has among the highest mesothelioma rates in the world, similar to countries such as Australia and the Netherlands, and research shows this is likely to be because more blue and brown asbestos was used here than in other countries.

Annual numbers of mesothelioma deaths in Britain have been broadly level over the last decade with an average of over 2500 per year. This compares with less than 200 deaths per year in the late 1960s when the data were first collected. The latest data show that in 2020 there were 2,544 deaths. This is a rise of 6% compared with the number in 2019, but our analyses of trends – and particularly the lower rates seen among those born more recently – still suggest that annual deaths will reduce over the coming decade. Around two thirds of deaths now occur in those aged over 75 years, and deaths in this age group are continuing to increase while deaths below age 65 are decreasing. Unfortunately, part of the reason for the increase in mesothelioma deaths in 2020 compared with 2019 could be that some people who were suffering from mesothelioma may have died from COVID-19 during the first waves of the pandemic prior to the availability of vaccines.

The majority of mesothelioma deaths are among men, though the data for women show a similar pattern of increase in deaths over the long term, with over 400 per year over the last decade and 459 in 2020. The statistics show that a much smaller proportion of the overall deaths in women worked in occupations that were most obviously associated with asbestos exposure. Other research into asbestos fibres concentrations in samples of lung tissue obtained from collapsed lung patients also shows that exposures in the past were not confined just to those who worked with asbestos as part of their job. Such exposures are likely to account for many current cases in women, and similar absolute numbers of cases in men. This research also shows that exposures reduced rapidly during the 1970s and continued to reduce after 1980. However, although it is now a long time since there was any new use of asbestos in Britain, clearly there is an important and ongoing need for strict controls to prevent exposures arising from asbestos where it remains present in buildings today.