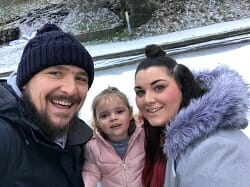 Cracking on with life

Liam is currently having regular scans but no treatment. He is symptom-free and his scans are showing no new growth of the cancer. Here he shares his story and experiences of living with mesothelioma and ‘cracking on with life’.

Liam was working as a roofer when he suffered a serious fall in September 2015. His injuries were severe and included a broken neck, hip, ribs, dislocated elbow and punctured lung.

Six months later, Liam returned to work in an office-based role and felt physically almost back to normal. Then, in November 2016, he banged his head playing in a soft play area with his young daughter. Liam felt nauseous and dizzy and, because of his previous neck injury, went to A&E to get checked.
Liam had an x-ray which showed no problems with his neck but the doctors noticed that his right lung was 50% collapsed.

This was a shock to Liam as he felt fine and had no symptoms. The lung was inflated and Liam was discharged with an appointment to come back in February for a talc pleurodesis – a procedure to reduce the chances of it collapsing again.

It was during this procedure that the camera showed tiny specs (like grains of sand) around the lung. Doctors continued with the talc pleurodesis and then performed a biopsy on the unusual cells the camera had picked up.

The test came back positive for mesothelioma. However, Liam wasn’t told that it was cancer but was referred to specialists at Glenfield Hospital.
It was there he met Mesothelioma UK’s Head of Services and Clinical Nurse Specialist, Liz Darlison. Liz informed Liam that mesothelioma is a form of cancer.

The diagnosis was a huge shock to Liam who cannot think of where he might have been exposed to asbestos. He had, however, heard of mesothelioma as his great grandfather, grandmother, great uncle and aunt had all died of it. His grandfather was a miner, his great uncle was a mechanic and the female family members had washed their clothes.

The other reason the diagnosis was such a shock was because Liam had not experienced any symptoms – and is still symptom-free today. He plays football and is fit and active.

Liam commented: “The first few months were a blur, always wondering if this would be my last Christmas or my last birthday but as time went on I learnt to basically stick two fingers up at the cancer. After the first six months or so, I became mentally much stronger. The main reason for that is my three-year-old daughter – I’m determined that nothing is going to stop me seeing her grow up.”

Liam and his family have learnt that time is precious and to take opportunities when they arise. They have been on holidays and even brought forward getting married, which they did in New York. In Liam’s words, he’s “just cracking on with life.”

Because Liam has no symptoms and is generally feeling well, he is a good candidate for several clinical trials. He was on the LUME-Meso and is open to trying new treatments as and when necessary.

For now, Liam has frequent scans and so far, they are showing no new growth in the cancer.