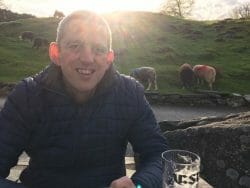 Currently feeling well and on no medication

David, 42, was diagnosed with mesothelioma in October 2015. He is currently feeling well and on no medication.

In 2013/14 I began experiencing flu-like symptoms with pain in my back and fatigue. I visited the doctors but having never worked with asbestos, I wasn’t the normal mesothelioma patient, especially at such a young age.

After two biopsies and symptoms for 18 months I was finally diagnosed in October 2015, three weeks before my 40th birthday. Being married with two young children, our lives were turned upside down. I’d been given a terminal diagnosis and told I had less than 12 months to live – it was a bombshell!

I have no idea where I was exposed to asbestos. It could have been when employed as a meter reader, a temporary job whilst at university, from DIY, or even when at school.

However, I wasn’t going to dwell on that, and put all my energy and focus on doing what was needed to give me more time with my wife and kids.

Therefore, we took the decision to have radical surgery and my left lung was removed three weeks following diagnosis. It came with a one-in-five chance of death, but rewards of a longer life!

This was followed by four gruelling sessions of chemotherapy which completed in April 2016. The support from the surgeon, medical staff, doctors, and nurses was exceptional. Without them I wouldn’t be telling the story today.

I returned to work gradually in September 2016, and slowly got back to the new normality.

I wanted a challenge so in July 2017, after seven months of training I was well enough to complete a gruelling 100-mile cycling challenge.

18 months before I did it I could hardly walk and needed a zimmer-frame in hospital. Through the cycle challenge, I wanted to show others that no matter your state of health, with the correct training, support and belief, anything is possible.

Now 42, and two and a half years since diagnosis I am one of the lucky ones and currently on no medication. The only symptoms are breathlessness/tiredness which is from only having one lung and scan anxiety.  I am back to work full time and trying to live life to the full.

The support from everyone and especially my wife, kids, family and friends has got me where I am today.

David talks more about his mesothelioma journey in his blog.