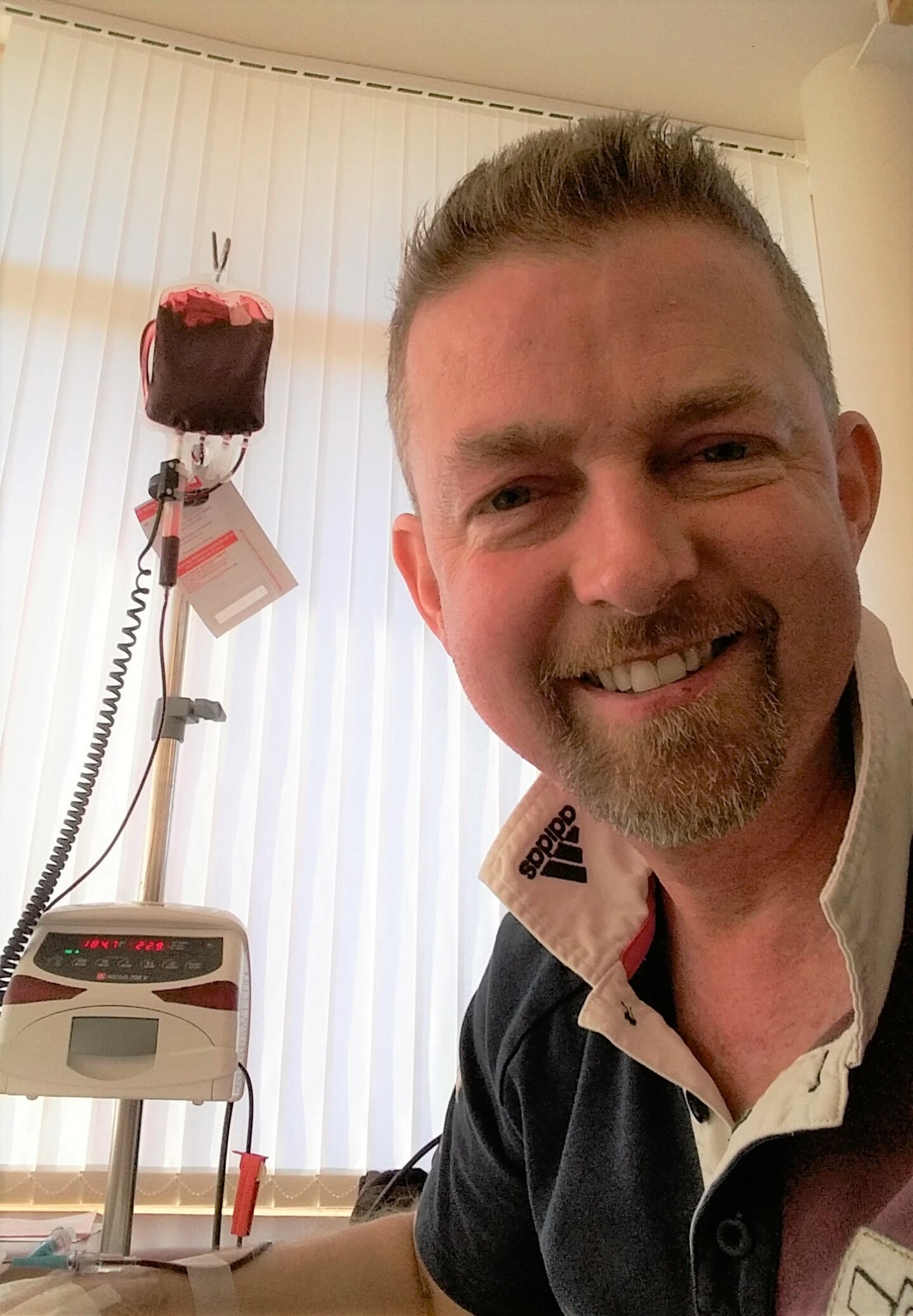 Living a ‘new kind of normal’

Caleb Saunderson (46), was diagnosed in 2017 with both pleural and peritoneal mesothelioma.

In 2016 he began to feel breathless quite a lot and decided to visit his GP. Due to a history with childhood cancer and also bowel cancer in 2014, Caleb’s symptoms were taken seriously and he was referred to a chest clinic and had several breathing tests and x-rays, and a scan. His symptoms were put down to being a result of his previous radiation treatment.

Later that same year, at an unrelated appointment, doctors discovered he was also anaemic.

A friend of the family, who was also a doctor recommended Caleb see another physician. This time a build-up of fluid on his lungs was discovered and he had a biopsy of tissue around his lungs but doctors could still not give a definitive diagnosis. Caleb was still suffering with breathlessness and had to have blood transfusions to combat the anaemia.

A routine bowel scan (due to his previous bowel cancer) in May 2017 showed nodules on the peritoneum. This was followed up with an endoscopy and biopsy. Doctors were expecting the results to show secondary bowel cancer but the results eventually came back positive for mesothelioma.

In July 2017 another biopsy was performed on Caleb’s lungs and this time the results showed mesothelioma.

In September 2017 Caleb began six courses of chemotherapy and steroids which finished in February 2018. Thankfully, the treatment had a positive effect and the cancer is stable, with no new growth seen in the last two scans.

Caleb has learnt that mesothelioma is very hard to diagnose, and without any obvious exposure to asbestos, and with his medical history, it just wasn’t something the doctors were looking for. Fortunately, he was diagnosed at one of the UK regional mesothelioma centres and has benefited from access to a mesothelioma nurse specialist, along with a lung nurse specialist at his local oncology unit, both partly charity funded.

Caleb and his family have learned to accept a ‘new kind of normal’ which means life carries on but at a slower pace. Every three months Caleb has a scan, which, although reassuring, can also be unsettling. In between scans, he is still working and enjoying time with his family.

If you’d like to read more about Caleb’s experience with mesothelioma please take a look at his blog.