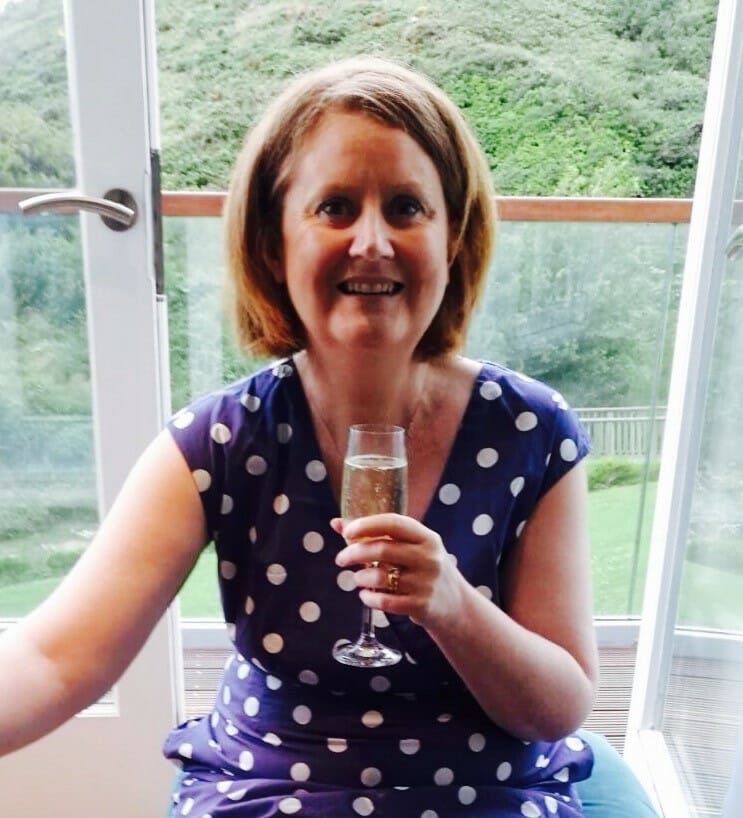 Very sadly, Bernice passed away on 3rd June, 2020. She will be deeply missed by her husband Kevin and her family.

Bernice Scullion is 46 years old and lives in Shropshire with her husband and two children. Bernice was diagnosed with mesothelioma in April 2017 and is currently (April 2018) undergoing a second round of chemotherapy at Wythenshawe Hospital in south Manchester.

Bernice believes she was exposed to asbestos during her time working for the Royal Air Force, which she joined in 1994 and left in 2000.

Her career with the RAF began at RAF Halton where she did basic training before training to be an assistant air traffic controller at RAF Shawbury. Bernice’s husband, Kevin, also worked for the RAF, meaning that they have lived and worked on several bases around the country including RAF Northolt and RAF Leeming.

Bernice took some time away from the Air Force in 2000 to look after her young children but returned to work in 2003 with the MoD Civil Service, as an air traffic controller. Over the next nine years, the family lived on various RAF bases from Scotland to Cornwall, before finally moving to RAF Shawbury in 2008 and then leaving the Civil Service in 2012.

Bernice first recalls experiencing pains in her stomach in 2009 but the symptoms became much worse in 2015 when she experienced severe pain and swelling.

Doctors could not give Bernice a conclusive answer and lots of possible causes were mentioned, from a pulled muscle to gynaecological problems. In 2016, Bernice was told that she may have ovarian cancer and had an ovary removed.

However, the pain continued and Kevin had to take Bernice to hospital as she was vomiting so violently.

A scan at the hospital revealed a nodule on her right lung. Surgery was carried out to remove the nodule and part of the lung. Analysis of the lung tissue revealed possible mesothelioma. Like many people, Bernice had never heard of mesothelioma but after finding out about it was relieved when doctors performed a scraping of the lung and told Bernice that, while there were abnormal cells, it was not mesothelioma.

Bernice continued to have problems and was seen by various doctors, both thoracic and gynaecology specialists. Neither were able to give a definite answer as to the cause of Bernice’s pain.

Feeling frustrated with the lack of answers Bernice and Kevin eventually took matters into their own hands and decided to pay for private treatment to have a hysterectomy, hoping that would solve the problems. It was at the BMI Healthcare hospital that the surgeon performing the hysterectomy noticed that something wasn’t right.

He told Bernice that he believed she had mesothelioma in her abdomen, pelvis, and lungs. This was devastating news for Bernice and Kevin, particularly after being told it wasn’t mesothelioma.

Bernice was referred to the Christie Hospital but there was no mesothelioma specialist available and so she had to go to Basingstoke Hospital – a three-and-a-half-hour drive from their home.

In May 2017, Bernice saw Dr Muhammed at Basingstoke who admitted her and drained two litres of fluid from her swollen abdomen. Three weeks later, he drained 14 litres. Bernice was fitted with a drain so that it could be done at home, but no local district nurses had had the training to help and so Bernice and Kevin had to do it themselves.

Bernice recalls feelings of loneliness as there just didn’t seem to be anybody who understood, or knew enough about, mesothelioma. It’s classed as a rare disease and so contact with other patients or specialist healthcare professionals is vital to help patients deal with it.

The travelling long distances, particularly with the swelling and pain, was becoming too difficult for Bernice so she was relieved to be referred to Dr Paul Taylor at Wythenshawe Hospital where she was put on a course of chemotherapy in July 2017 for 12 weeks.

Thankfully the chemotherapy worked well and, apart from feeling unwell during the treatment, Bernice felt much better afterwards. The pain and swelling stopped and the family were able to enjoy Christmas.

However, by the end of January 2018, the fluid began to build up again and a second round of chemotherapy was recommended, which began in April 2018. Bernice is feeling positive about this and hoping to get onto a clinical trial after the chemotherapy.

Throughout her journey, Mesothelioma UK clinical nurse specialist, Mairead Dixon, has been supporting Bernice who says she has been “amazing”. Bernice has also received advice from an asbestos support group and has been able to claim benefits such as Personal Independence Payment and Industrial Injuries Disablement Benefit.

In addition to the government benefits, Bernice is in touch with an industrial disease solicitor at Irwin Mitchell with the aim of applying for compensation from the MoD for exposure to asbestos. The compensation process for armed forces personnel and veterans is very complex. This is one of the reasons Mesothelioma UK offers a specialist advice service for those who have been exposed during their time in the armed forces.

Bernice felt, at times, very lonely due to the lack of knowledge about mesothelioma among the doctors she saw but was determined to get answers. She feels it is important that patients are persistent in contacting doctors until they are seen by specialists and not to allow themselves to be ignored or passed over.

Following her second course of chemotherapy, Bernice is hopeful of a referral to Professor Dean Fennell at Leicester and to look into the possibility of joining a clinical trial.